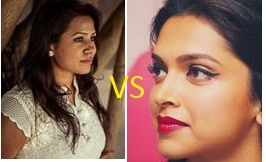 War of Choices – If you have, HE HAS TOO!

But social media especially feminists did not take it lightly. Many women have openly bashed DB for taking sides with men. We find these comments on her blog – 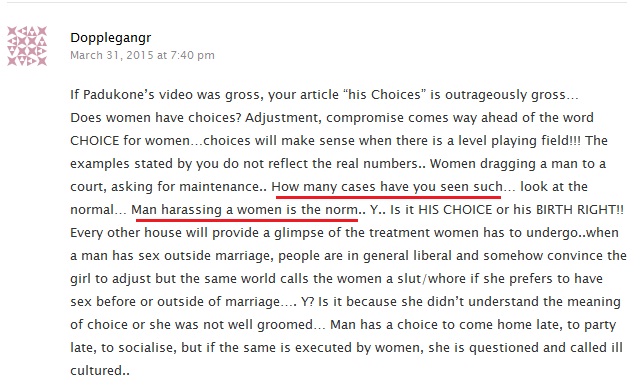 Obviously, she doesn’t have any knowledge of what she is talking about. DB handles such cases every day for last almost two years if not more, telling her that she doesn’t know the reality only show poorly on the person commenting. 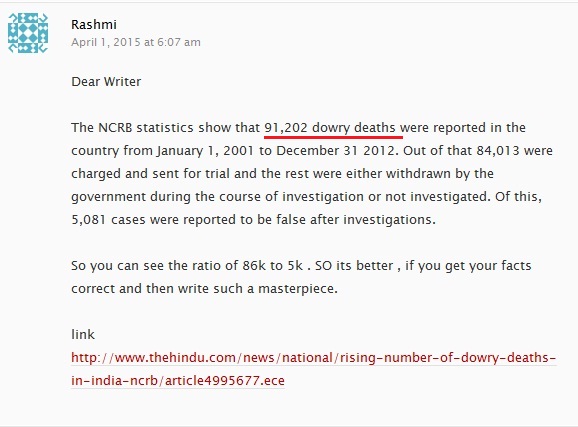 Then came the lady with Dowry Death sword, again with little knowledge. She didn’t know that 80% dowry death cases close in acquittal. Well, also the definition of dowry death is also vague. Any unnatural death of a wife within seven years of marriage is dowry death. But the opposite is not true. And husbands committing suicide within seven years of marriage is much more compared to that of wife’s suicide. Now if you have thought dowry death is always forceful murder, you are wrong. Study such cases, you will know.

Then comes a male feminist (don’t ask me how I know, the comment made me feel so) with supporting the video. So, his point is since women are traditionally suppressed they expected to be rebellious. It is said at a time when the women who made the video were not suppressed. The person, in fact, portrays that having unlimited sex or wearing (or not wearing) any cloth anywhere is empowerment and equality. Well, I wonder when did I see a man in his knickers in a national TV debate or a man in his slippers in a board meeting. Even nightclubs have a dress code for men and not for women. And this male feminist seems to be totally blind and ignorant about his society. 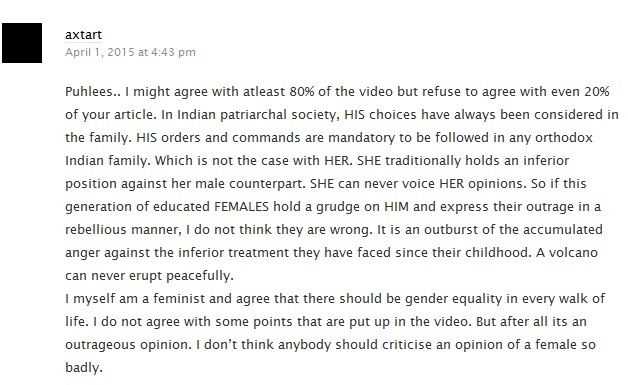 Now comes the woman who identifies DB’s choice as filthy –

Ironically, she didn’t find anything filthy or vulgar in My Choice video which promotes nudism, objectifies women, promotes sex outside marriage or promotes adulterous relation and children. Well, we understand she is another filthy creature called a feminist who wants to create a lesbian world, as rightly said by DB in her article. No wonder why Zia is furious here.

…and then someone else comes in support of Zia

Then comes a big curse in the name of Anamika- 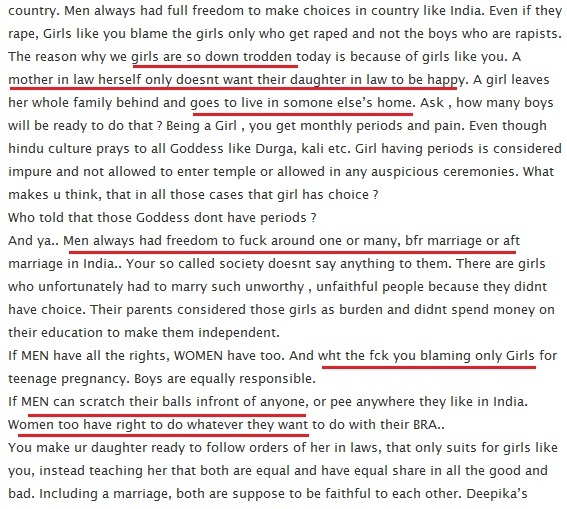 This comment is longer so couldn’t copy the entire comment. I was astonished to see when did men have the right to fuck anytime they wanted without consequences? Also, I did not know scratching balls in front of others is my right. When I saw this comment, I was thinking if it was indeed real. All DB said in her article was if girls say it is my choice, then they needed to take responsibility of their choices as well, they just can’t blame men for everything happening to them. Many girls are offended by that. Looks like taking responsibility is not something they want.

Then comes Amoni. I am not sure if she really knows what she wants to say. Well, she said something that doesn’t go well with the article, because the DB article talks about women getting ready to accept men’s choices as well.

Also if Amoni was little open-minded she would have understood that it is the feminists who constantly nag about rape and molestation and never talk about false cases.

The next comment comes from a feminist blind person 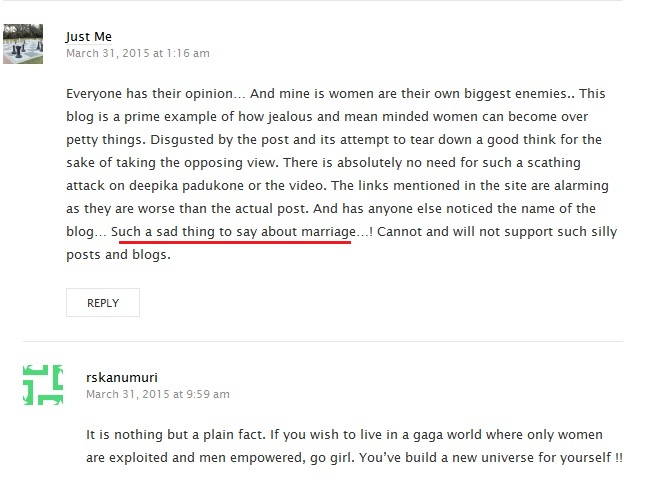 Well, I mentioned her blind because even after checking the news links mentioned in the blog she preferred to be blind on today’s social dynamics -a complete hypocrite narrow-minded woman. However, the woman who responded to the reply put her in her place. Once again the comment from Just Me proves she is a typical feminist who just wants to criticize anything that is against feminism, completely blind and negative person. The name Just Me also shows she is egoistic, self-centered woman – very typical of any feminist though.

So these comments make it clear that feminists only want to discuss women while they discuss equality. How unfair. Anyone talking about choices of men or saying every choice has its own consequences that the women need to bear becomes a problem. While feminists claim that she has a choice but they don’t allow women like DB to express their choices.

Then I came across this news – 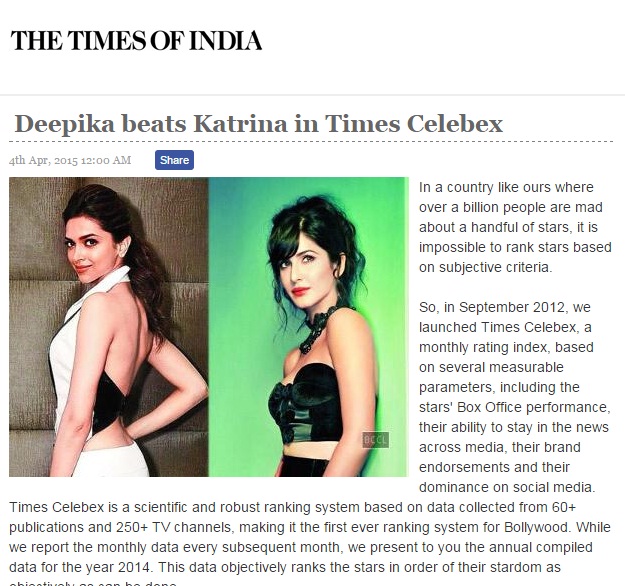 A careful examination of all parameters to rank actresses told me their social media ranking and followers help them in getting the top spot. That, in turn, helps them in getting more advertisements, sponsors. So there is no doubt why celebrities make these videos. They create paid controversy so that they can remain in business.

And when our Bollywood celebrities talk about feminism, this is what they do and promote- 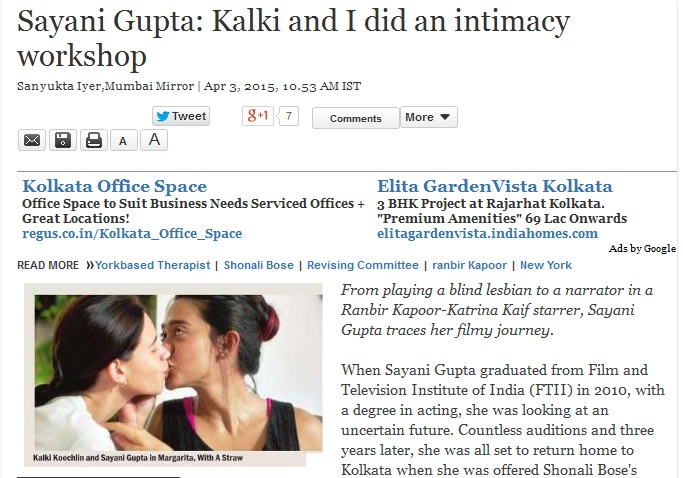 Well, they may be like this in their personal life and it is their personal choice. But they want more people to be like them so that they get more likes, better social ranking, more calls for advertisements and more money.

Unless we stop celebrity worship this will continue. So if you call yourself a proud feminist you know what you are actually promoting. 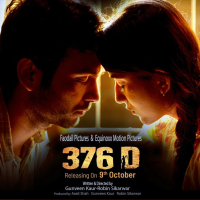