My Interview With BBC World On WomenAgainstFeminism 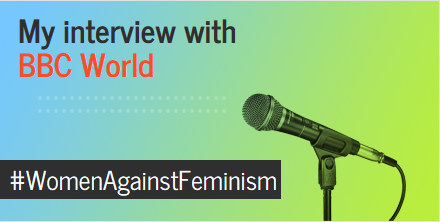 Recently BBC World has interviewed me on a recent global trend of #WomenAgainstFeminism. This movement has become popular in the past few months. Global women who have seen the hatred feminism creates in the name of rape, molestation, domestic violence or other issues and tries to criminalize men based on their gender has come forward to fight against feminism. I have been vocal about this requirement of women coming out against feminism in India for a long time and I have been one of the first persons to Tweet using the hashtag #WomenAgainstFeminism. BBC team has done an analysis of my articles written over the last several months and came to know that I have sounded the death of feminism and the need of women to join the Anti-Feminism movement long back. In fact, I was amazed to see the level of research they have done on my blog when they started the program by asking me a question of how I have foreseen this change long before this existed.

I am sure I am not the only one who noticed that feminism is dead but I am one of the first people to express that on my blog. Probably worldwide many women could understand the same and hence when someone from the US created the Facebook and Tumbler pages on WomenAgainstFeminism that has just gone viral. These are the women who know that men have been criminalized so much in their society that men are denied justice everywhere. But feminism is allowed to overgrow in India and currently, extreme shaming of men is going on in India, except the fact that Indian women are probably the most secured and respected women in the world.

Feminists always say that India needs a lot of feminism because there is rape. What they don’t know is the fact that rape is higher in western and developed countries. Also, we don’t know how many men are raped as our rape laws are not gender-neutral. If we consider per-capita rape India is still in 46th position in the world. None of these is to justify rape but is only to show that creating a rape hysteria in India is only going to retard our growth and hence the WomenAgainstFeminism movement becomes significant for India.

A crime like murder was banned long ago but they still exist today. No amount of law of gender shaming can stop crime as criminals are there and will be there. But in the process of stopping rape, we have created an impossible situation for innocent men who can be easily accused in rape for any narrow gain and it will be impossible for him to get out of the accusation.

India already has many women who are vocal against feminism but the number is very less compared to the western world. The one-sided propaganda about crime against women when crime against men is not even considered as a crime – is making Indian society an increasingly dangerous place for men to live. However, men who are unaware of these social changes or who do not understand the future implications of these support these feminism agendas and ruin their future for good. The only benefit goes to criminals who are masquerading as feminists and who are using women as shields for their personal benefits.

So I expressed in the show that Indian women need to shun feminism and embrace egalitarianism. When the laws become outrageous and deny justice for men and when any sexual encounter (or none, it does not matter as it is based on victim’s statement which can be false) can be termed as rape then it creates a deep-rooted gender divide in the society. This gender divide creates a deep-rooted hatred that creates and sustains crime. Hence this will increase crime rate in India. Now India will see more crime like murder than before.

Hence Indian women need to separate themselves from these criminal feminists who are creating this situation in India and shaming the country everywhere, else they will lose their own credibility. If there is no way to distinguish between good women and bad women and when bad women are rewarded through false rape cases or any other false case then it becomes extremely difficult for good women to prove their worth. No matter how much they cry that they will not file any such false case they are seen with suspicion as anytime they can change their minds.

There is no doubt that globally feminism has taken a backseat with WomenAgainstFeminism movement. Feminists are trying to show how much they are for equality and in all the debates today they are talking about age-old equality theories that were valid in the ‘60s and not valid now. Indians who are more emotional with regards to rape and security of their own family members do not understand this because they have not bothered to check what feminism wants or what has been their agenda globally.

Hence it is very important for more women from India to join WomenAgainstFeminism movement and show that they are not against men but pro-egalitarian. Simply because rape as crime exists today that does not mean all men has become rapists or Indian society approves rape in any manner. The main problem that remains is terming every sexual encounter as rape and denying justice for innocent male accused.

Indian laws becoming more draconian and one-sided is not women empowerment, it is, in fact, creating deep gender divide where every woman is losing their trustworthiness with such false cases or no defence from false cases. Now with no defence and no surety that a woman will not file such false cases women will have a bigger task to prove that they are trustworthy. The earlier Indian women understand that, and the earlier they join WomenAgainstFeminism the better it is for them.