She Was A Beauty Queen, But Now A Vagabond

A funny thing happened on my way to home, as I was hurrying with my suitcase someone from my back said – “Ei tor bou morechhe? Bhalo hoyechhe, abar biye kor..”. (if your wife died it is good for you, get married again). 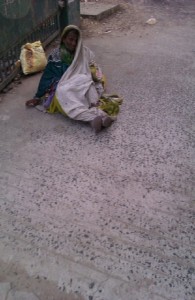 I was so amused to hear that and looked back to see the person who said that to me. She is the vagabond who lives outside my newly bought flat in Kolkata. Since I live in Bangalore nowadays I hardly go to that flat. I have seen her living on the footpath ever since I started going there but this comment was not expected from her.

I went close to her and tried showing some anger – “Ei buri, ki bolle tumi?” (hey old woman what did you say?)

She said with a smile – “You are a lucky chap, get married……….” She said something in abuses that I can’t write here.

I am the last person to bother about this nonsense but I could not understand why did she say my wife has died. She is not. I thought she was only an insane soul so ignored.

In the evening I went to a nearby tea stall to have my evening snacks. I like their snacks so that becomes my thek (adda, probably only Bengalis will understand that 🙂 ) whenever I go there. I narrated the story to the tea stall owner but what he told in reply has blown my head.

He told me that the woman whom I thought was an insane paagli (mad, vagabond) was actually Miss Kolkata of the late seventies. She was from Shymabazar, Kolkata and got married to a rich family in that locality. They were so rich that she used to wear gold all over her body and used to travel only by hand-pulled rickshaws. I was amazed to know that she had a beautiful family with two kids a boy and a girl and a lot of land and a BIG house.

Other people present there added to that story. What I came to know was a story of abundance, luxury, fame and page 3 fantasies. Then why is she like this now? Living on the footpath, as if she has nothing?

The shop owner added that she was richer than me and she still owns a BIG plot there. It was very surprising for me to know that a woman with completely settled kids and a very rich family lives on the street. So, I kept on asking questions. Especially I was hurt to see that even her children don’t look after her.

What the localities’ present told me was heartbreaking. After she won the Miss Kolkata contest (no one could tell me the year) she has become more aggressive and changed her behaviour. She has started ignoring her family and started living on alcohol, parties, night out and so on. Someone with money and fame who completely ignored her duties to her sudden rise in status and who completely ignored her children got it back shortly.

Her husband and the entire family left that place in shame. They sold out some properties that they could and rest remained to her, even children never looked back at their mother. She didn’t realize all these and arrogance might have kept her away from being sensitive. She had it all but lost everything in false empowerment.

Even today she gives Rickshawpullers 100 rupees notes for a distance of rs 10. Sometimes she gives 500 rupees too. I was shocked. How does she get so much money? Looks like still there are people who give her money.

She burns under the sun, soaks in the rain, lives on the street for 12 months of the year. Residents give her food, money and she survives. Some of the locals added, she never falls sick and she is like this for years. See how god punishes you for your behaviour.

I don’t know if God exists. But I wonder when in India this govt. has budgeted close to Rs. 100,000 crore for women empowerment, why such elderly people don’t get shelter, food? Why is this women empowerment only centred around creating some gender-biased laws and spent on building a new house for National Commission for Women, when the grass-root level people remain vagabond. I realize that she is not a vote bank anymore, she has lost her voice with age, she has lost her sanity with fake empowerment now she is a burden to the society. She is a nonissue for the feminists who claim to demand women rights. Actually, she is no more a woman.

Dear Women – Are you sure your empowerment is not robbing you of your happiness?