Have Problem In Paying Alimony? Write to PMO

Dear men in India, you are very lucky to get a PM like Narendra Modiji. In fact, the way he is bringing the good days (acchhe din) that will surely bring happiness for all of you.

Per a recent news, a man from Bulandshahr, UP had written a letter to the PMO about their inability to pay a dowry for the marriages of his two sisters and asked the PMO for help. The letter was written one year back but Modiji has reacted to it recently and asked the district administration for an inquiry.

Here is the related news from The Indian Express

Dear men in India, especially the poor men (or the rich who are made poor on divorce) and pay a heavy price for their divorce and lose everything due to these cases or are forced to sell all their assets or take up heavy debts to pay alimony to their wives; you have a messiah now and you don’t need to commit suicide.

Since PMO has taken a positive step towards helping in illegal activity (giving dowry is also a crime in India under DP act) he will definitely help poor men who are not able to pay alimony which is legal (payment of alimony is legal and once ordered by a competent court a man is bound to pay the same or face jail term). Please note, a girl has the option of not marrying if the groom is asking for dowry and if you may know there are many men and women in India who are not married ever in their life but still such help are sought and acted upon by the PMO. One also has the option of just going for a registry marriage and without any expense. You may also note that a man does not have any way out of paying alimony, because he is legally bound to pay that.

Dear alimony paying men, now you no longer need to take a personal loan with the heavy interest rate to pay your alimony, you don’t need to sell your kidney to arrange for the same, now you don’t need to worry about court orders that say “beg, borrow, steal to maintain your wife”, you do not need to worry that your property is sold out for paying alimony, you can just write to PMO for help and expect some help from there. Make sure, you attach the copies of a court order for your alimony payment and help the investigation.

Some critics may find this step by PMO as the first step to make dowry payment legal in the country. They may also find that whoever decides to marry these sisters now, will surely get a dowry case against them as PMO itself will become the prime witness of taking dowry (well, don’t argue that giving dowry is a crime, the ruler sets the rule in a country and whatever he does becomes the rule ……at least for him. But a common man can be held guilty for doing the same).

Don’t pay any heed to these critics, they are simply inspired by some PMO tweets – 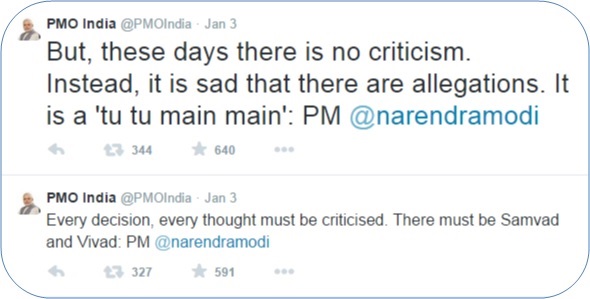 You guys just cheer the decision. Start writing letters to your PMO and please don’t commit suicide or crime anymore because of your inability to pay alimony. If you are saying you wanted to obey the court order that ordered a husband to “beg, borrow, steal to maintain his wife” and turn out to be criminals for paying maintenance to your wife, hold on, now our national treasury is open for you. Go loot us openly, we idiot taxpayers are there to bring acchhe din (Good Days).