When men are unnecessarily termed as molesters they refuse to help women even in dangerous situations, resulting in grievous injuries to her. The same has happened to a woman a few days ago in a Bangalore Volvo bus.

She had to stand up from her seat for something and was not holding anything when the bus applied sudden brake resulting her to strike a rod which she tried to grab initially in order to prevent herself from falling. But the jerk was so sudden that she could not withstand the thrust and went ahead and fell badly. She was hit directly in the head and then in her spine by another seat about 5 feet away.

There were three hands that went instantaneously to grab her and prevent her from falling. All three were from gentlemen. Two of them were occupying the aisle seats on the front rows in front of us and another was sitting where she exactly fell. But all of them retracted immediately and let her fall instead of grabbing her and getting headlines on news channel.

There was another woman sitting very close to the place where she fell but she didn’t stretch her hand to prevent this fall either.

The woman was lying on the floor for five minutes and everyone just looked at her without trying to make her stand or see how badly she was injured. Men were all the more reluctant (being a man I could feel that) as she was a beautiful modern girl in her 20s. All men in the bus continued to remain seated in their respective seats without moving an inch even after her great fall which was visibly very hurtful. All were just staring at her and hoping that she was alright. No one went to her to see if she was okay. No one even gave their water bottle to help.

The front portion of the bus was full of young working women but they were looking blankly without doing anything or knowing what was to be done. Only after five minutes, one woman gave her water bottle to another to help her. All these five minutes the girl was lying on the floor unattended by anyone.

So far in my life, I have always seen men running towards the woman and helping her instantly in such situations. But constant male shaming and unnecessary hype around molestation and harassment complaints and nationwide sensation created around such cases have made men immune to these pain of women. On the other hand, women have never played the role of protector for anyone. They have always been victims. So they didn’t know how to save others from danger either. Probably they still felt that some men would have come forward to help and men were reluctant to be termed as a molester.

In this case, even I could prevent her from falling by grabbing her hand. But all of us who were in the position to help her was thinking of the consequences. I was not shocked to see three men stretching their hands and then withholding it within seconds and letting her fall and get seriously injured.

I am not sure if she had got internal brain or spine injuries. She was barely able to stand even after ten minutes. She got down where I did. But there was no one offering her to take her home. I looked at her, wanted to ask her if she was okay but did not.

Dear women, the time has come that you automatically take up protector role for others. You have shamed men so much that men have stopped being your protectors. I do feel sorry for women in my home as no one will help them too when they are out, but I can hardly do anything about it. Until a few months ago the situation was opposite. But women like Jasleen and Rohtak Sisters who wanted instant fame and the media, politicians and the legal system that showed their incapability to punish such women has led to this situation. Dear women, this is what feminism has given to you, so deal with it.

If you think it is a generalization of the matter, that is the same thing you have done every time there was any reported incident of rape or sexual violence or domestic abuse. You all have denied justice to men and this is what the consequences are. You have never created hue and cry about punishing women Jasleen, you have never created any petition to close down NCW that promoted such legal terrorism, now you are the ones who need to suffer the unfortunate consequences. 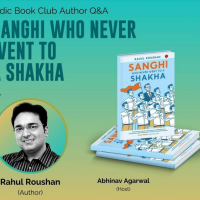