This Painful Story Of Child Visitation Will Make You Cry 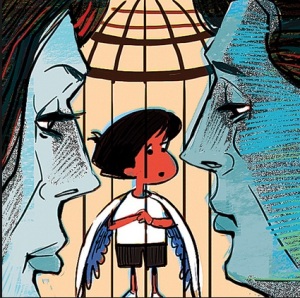 I met him for the first time in our Bangalore meeting. Since he was a Bengali too we became friends very soon. In our meetings, all men are fighters against injustice from Indian gender biased laws. In other words, all who attend our meetings are suffering from legal terrorism in the name of women empowerment. He was not different too. Every week in all our meeting locations across India we get at least three new victims like him or you can say like me. Yes, actually there is no difference in our stories. Well to some extent at least.

That day he took me with him to his housing complex where he had a two BHK flat until some time ago.

As I entered the complex with him he parked his car in his parking lot. He handed over the car to a man who would clean his car for next half an hour while he took me inside.

It was a huge upmarket complex with flats in the range of one crore (10 million). That is quite a lot of money in Indian standard. This complex had all failures that I could think of – swimming pool, tennis courts, badminton courts and what not. While we were walking inside on that Sunday evening I realized that all facilities were used to the maximum possible extent by the inmates. The people who stayed there were all senior managers from all possible industries.

We went to the backside of the housing complex where the children’s park has various rides for children up to early teenagers. In the meantime, he told me that he wanted to meet his son. He was visibly excited when he said that. I was happy too because he was happy.

He pointed to a boy from a distance but I did not understand who he was pointing to. We approached near the children playing in the park until there was a gap of around 10 meters when he abruptly stopped. He was staring at the children with his eyes sparkling with tears. I didn’t understand why he had to stop at a distance when his son was near him. I pushed him to go near the children but he resisted for some unknown reason. I was really annoyed by his behavior. In the meantime the boys noticed us. Immediately, all the boys except one four / five year old went away. They all dispersed like magic. I was even more surprised and didn’t really know what was happening.

By that time we went closure to the child standing there with good head staring at the floor. My friend called his name twice and asked in English how he was. My friend asked him some other questions too to which the boy replied only by nodding his head. I didn’t understand what was happening and I became impatient. I scolded my friend for not taking his son on his lap and creating a drama there. I also noticed that other children were noticing everything from a distance.

However, my friend didn’t spend more time there he abruptly cut short his visit and shook hands with the child from a distance of at least two meters. Well, don’t ask me how that is possible and how much did they have to bend to shake hands. Even I was not able to understand what was happening.

When we were returning from there, I was furious at him. I scolded him and asked him why he didn’t hug his son or took him on his lap.

But what he told me was not only heartbreaking for a father like him, it was probably the greatest shame to a parental relation.

He told that his wife had an extramarital affair but despite that, she got married to him. In his seven years of marriage, he had tried his best to be a successful provider and protector for his family. He bought that expensive flat for his family’s convenience. But after they moved into the flat his wife showed him her true colors. Eventually, she filled all false cases against him and his ailing mother and made them vacate their own flat and stay in a small rented flat in a different place. All these while he continued to pay bank EMI and interim maintenance to his wife and child. He also mentioned that his wife was staying in that flat where her paramour was a repeat visitor.

I was still wondering why he didn’t take his son on his lap when he continued saying that if he tried to get any closer to his son, his wife would have beaten the child mercilessly when he returned home. That was the reason even though both of them wanted to hug each other no one went ahead with the idea. He also told me that all other children were his wife’s spies who would report every minute details to the mother of the child. The child was strictly instructed by his mother not to meet my friend or talk to him.

His name is not important. He can be anyone among us. Any of successful men who are the providers and protractors of their wives and believe buying luxury for their wife is their prime goal in life. These are the protectors of women who don’t know how to protect themselves from the same women they protect.