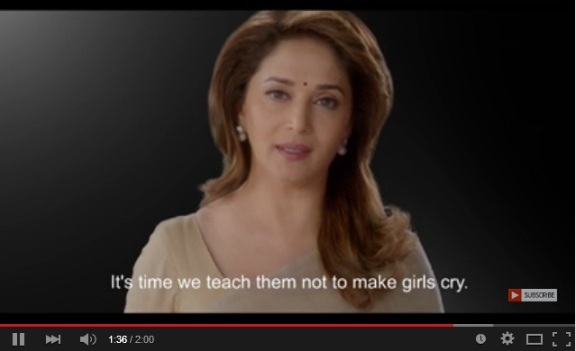 Dear Indian boys, now your Madhuri Dixit aunty has come forward with a typical patriarchal issue of asking the boys to be strong and hold on to their emotions. In her latest video for #VogueEmpower titled “Boys don’t cry” Madhuri aunty has shown that this advice to you guys leads to the deliberate suppression of your emotions making you desperate and more violent. She has also projected that this violence is targeted against women.

Now for those of you guys who still did not understand the reason why women become violent even though they are not asked to suppress their emotions and rather their crocodile tears can make you boys potential criminals/offenders in every possible circumstance this might be a shocker. You may think that it is not only women who face violence. If domestic violence is considered in a gender-neutral way, then men and boys face equal domestic violence from women as women face from men. But men and boys do not have any mechanism to report the same or none of your celebrity Bollywood uncles have the guts to create a video like this.

Now for you boys, the situation is even more serious. Madhuri aunty didn’t know that in a 2007 study, Ministry of Women and Child Development found more boys to be sexually exploited than girls. The same survey also found mothers as most violent abusers to kids than fathers. Now for those of you who caught Madhuri aunty’s hypocrisy of not reporting these need to know that Madhuri aunty is not well educated and well researched in these matters (I doubt her real education too). Please understand that she is an actress and all that matters to our Bollywood actors like her is money.

I will give you boys a small example from an earlier Gillette campaign where she had claimed that she did not like bearded men (as she had considered men with a beard as dirty, unclean) whereas, in reality, she had relation only with bearded men. That clearly showed that your Dhak Dhak Aunty is a liar based on convenience. In the latest video though she had just suppressed some facts and projected one-sided story.

Now dear boys some men did find the video as a video for men’s cause, too. Because Madhuri aunty projects that we make our boys more violent by teaching them to suppress their emotions. But what these men did not understand was it is the boys or men who suffer more aggression from anyone in their life. It is the boys and men who suffer more atrocities and dangers than any woman. You will know that when you check the accidental death, murder, homicide or suicide statistics of India. If one drawback of your aunty’s theory was that it didn’t explain why equal numbers of women are aggressive towards men and senior citizens, it also failed to recognize the fact that most of this aggression is actually channelized against men.

Dear boys, if you have thought that preaching of ‘Boys don’t cry’ is patriarchal oppression against boys you may not be wrong. This teaches our boys to be strong, be brave and to take everyone else’s pain and give them smile in return. Well, today we understand that it is too much to ask from a human being and such persons become terribly weak and helpless when they need help. Such men who act as provider and protector to the weak (elderly, women and children) around them can’t protect themselves when needed and undergo a deep emotional trauma. But dear boys what Madhuri aunty suggested that “Boys don’t make women cry” is even more dangerous. It is forcing you boys to please women around even when they are abusive, violent and harmful to your own existence.

Sometime back your aunty had acted in a film titled Gulaab Gang. This film bombed in the box office. I went to watch the movie on the third day and I was denied a ticket as there were no other persons to watch the movie. Indian audience had rejected her misandric move in that way, but still, she didn’t learn any lesson. In this video too, she had given a misandric message and claimed you, boys, as responsible for the miseries of women. She had completely ignored the fact that it is the Daughter-in-laws (DIL) who are responsible for most senior citizen abuse and the men cannot register a complaint against their abusive wives. By projecting violence in a gender-specific way your Madhuri aunty has shown you as criminals and girls as victims. In a way, she herself played the victim card here. In short, she has projected that it is the vagina that should matter the most to this world.

Violent Daughter-In-Law, Perpetrator of Harassment to the In-Laws

So dear boys it is your turn to identify such flop Bollywood aunties who want to regain popularity by bashing boys and men. Since you can understand that the idea behind Boys don’t cry was, in fact, to keep protecting girls and women. Today the same women blame you for domestic violence completely ignoring violence against you by your women partners.

So, if you boys are concerned about this, if you think aunty’s suggestion of don’t make women cry while women can make you cry is very dangerous for your own existence then you may realize that there is a demon hidden under the beautiful face of Madhuri aunty. The Dhak Dhak Girl has a devilish heart hidden under her choli and that devilish mind now wants to brainwash little children like you so that you become more vulnerable in the hands of feminist criminals.

1. Survey of abuse of Indian boys