UNFPA Study On Intimate Partner Violence And Masculinity In India

On 10th November 2014, United Nations Framework for Population Activities (UNFPA) has published a report Masculinity, Son Preference and Intimate Partner Violence in India. This study was conducted in collaboration with International Centre for Research on Women or ICRAW. This survey had many shocking revelations on intimate partner violence in India and how United Nations groups deal with the issue. This article will only focus on the issue of Intimate Partner Violence covered in this survey.

While setting the context for the study the report says – “India, ….has high levels of violence against women”. So we understand that the study started with the presumption that Indian women are the victims of Domestic Violence and Indian men are the perpetrators.

To support its claim, the report refers to the studies done by Campbell in 2002 and NFHS in 2005-06 on this issue. The article below already proved that how the earlier domestic violence studies were done in India was also biased –

How UN created a wrong picture of domestic violence in India

So to bolster their claim this time UN has come up with some statistical analysis and chi-square tests to make their study more complicated for general people to understand. However, the basic premise about the perpetrator in the study remained the same.

While setting the context of this survey, it says that “Indian culture makes male dominance over women justified and violence against women normal.” and ironically we see that the survey results also finds the same. So we understand that the intention of conducting this survey was also to prove that India has got a messed up society and culture that encourages violence against women by men. So the researchers had started with a negative mindset about India and went on to prove the same.

In section 1.3 of this report, the objectives of the study were elucidated. It starts with “The overall objective of this study was to understand the dimensions, nature, and determinants of Indian men’s attitudes about son preference and intimate partner violence”

So the researchers have made men criminals even before they proved in an unbiased manner by their research that men are in fact the perpetrators.

The report also shows how flawlessly statistical sampling was done keeping in mind different socio-economic and geographical factors. Without getting into all these niceties that common people do not understand and get lost in the glossy and hard to understand jargons let’s directly get to the findings of the survey on IPV.

Ironically even in this IPV survey, they have captured information about dowry in marriages – 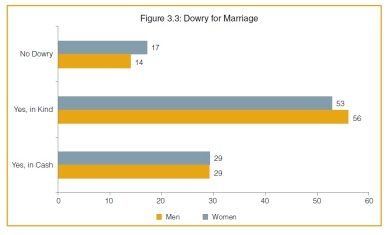 The survey specifically mentions about the religion of the respondents and says that “A majority of men (82%) and women (79%) in the sample were Hindu”.  Or in other words, the survey findings show that mostly Hindu men are cruel to their wives. (Hindus beware UN is again trying to malice your religion).

The graph below brings an interesting perspective –

While the report wanted to investigate into the Key Indexes that causes violence, it tried to examine economic stress as it says – “To explore characteristics that may affect men’s attitudes and behavior, we also asked men specific questions about their work-related stress or depression. Given the prevailing social expectation to perform the role of a breadwinner in the family, economic stress is identified as an indicator”.  So in a way, this report agrees that men do have reason to be under stress and the pressure of being a breadwinner is huge.

The last four questions were asked of men who were not currently working.

The above table shows us that how a man is pushed to the corner by the society to be a breadwinner for the family and how this can lead to a disaster situation in a poor country like India. 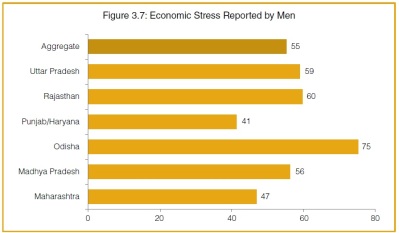 We find that a total of 88% women and 86% men have reported some form of abuse in childhood. This is contrary to our belief that ONLY women suffer from discrimination in India.

This study goes on to measure the relationship control behavior of Indian men (note, again this study wanted to know how MEN control relationships and NOT vice versa. A study designed with bias)-

Just see the nature of questions asked and you will easily be able to understand that if these questions were asked the other way (e.g. my wife always wants to know where I am etc.) the responses would have been the same. But as the questions were asked this way confirms that the survey had only one goal to show that Indian men are control freaks.

Please find the questions asked below – 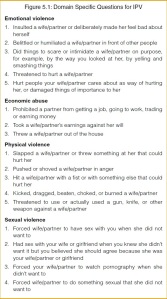 Please note that the surveyors had never tried to measure the IPV against men by women. The questions asked were considering men as perpetrators and women as victims. So we understand that the survey was never a neutral and unbiased survey in the first place.

Please note the results given below –

Please note that the above data is represented on whether a WOMAN (not a man) had experienced such violence in her marital lifetime.

A similar survey done by some other NGOs in India, focussing similar data for men, however, revealed a similar characteristic of IPV on this link – 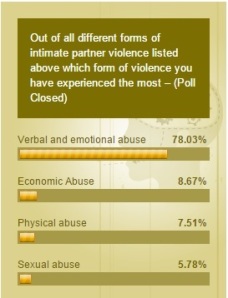 Also in terms of frequency of violence, this report shows the nature of violence in last six months as –

But this again was captured in a gender-biased way. In the recent survey conducted by some NGOs in India, the same domestic violence picture is captured for Indian men as well. It was found in that survey that 78% men who took the survey were subjected to emotional abuse by their wives. UNFPA survey failed to capture the men’s side of the story–

Similarly, the survey showed the following results for other abuses –

About 60% men reported economic abuse by their wives – 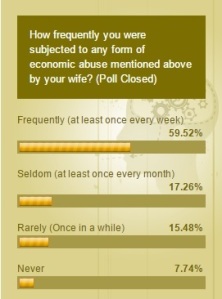 In section 5.2 of this report, it says “Intimate partner violence perpetrated by men and experienced by women is considered as one of the main outcomes of masculinity in this analysis”.

We understand that when one-sided study is done then the outcome of such report becomes invalid.

This report goes on to prove that if a man is abused as a child, he is more likely to become violent in his adulthood –

If we believe this data then we understand that if men are doing more violence (as claimed by this study) then clearly it is the Indian boys who are abused more compared to the girls. However, we still do not see any separate ministry for men and boys to take care of their issues.

From this UNFPA report, we understand that this report never had an unbiased or neutral approach to the issue of IPV. It had considered that a man is always the perpetrator and a woman is always the victim and conducted the study. So no matter how much statistical analysis it includes all its analogy falls flat as the researchers had never considered the other side of the story. It is thus evident that this is just another effort of UN to shame India and break Indian families. Indian media houses that reported this just highlighted one side of the violence and never tried to investigate into the matter to uphold the truth to the nation. This shows how poorly Indian media is performing today.

The significance of this report being published just before International Men’s Day (IMD) on 19th November once again points to the dire need of setting up of a Men’s Commission and a Men’s Welfare Ministry to challenge creating such bias by international organizations against Indian men and boys. Else the future for our little boys will be doomed forever. 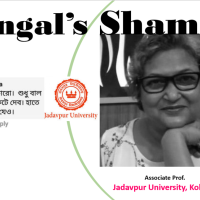