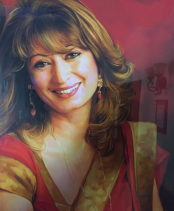 After the death of socialite Sunanda Pushkar, a sizeable chunk of the society is demanding to register of IPC 498a, 304B and 306 against her minister husband. We tried to take the viewpoint from some hardcore extreme feminists who were behind the creation of gender biased laws in India and some political leaders who boasted bringing in laws empowering women.

One of them Mrs. Sanjana Tumhari who appears in various national debates has directly rejected the plea saying – If media is saying that Sunanda has committed suicide that must be true. She was an empowered lady. She knew exactly what she was doing and as an independent empowered woman that she was, we need to respect her action. She has single-handedly identified ISI hand in the probable kidnapping of one of the most handsome ministers in India. Our investigative agencies should learn from her.

Another left wing feminist leader Mrs. Darinda Barat has also rubbished the claim that this suicide needs to be termed as Dowry Death. She clarified that she has sacrificed her life for her country in battling a foreign invasion of a different form. This incident shows that how poorly our security agencies like RAW are performing as they have failed to identify this invasion at the earliest. She has demanded immediate restructuring in RAW based on this.

She has also cited that even the Pakistani women journalist (who Sunanda accused of having an affair with her minister husband) was angry after being called an ISI agent, which means even Pakistanis get insulted if they are called ISI agents. This proves the sorry state of affairs in ISI too so that no one wanted to be named an ISI agent.

Commenting on the incident, chairperson of the National Commission Mrs. Samata Verma has opined that she has actually protected the nation from wasting a lot of time on social networking sites reading gossips about her personal life and vendetta. People will get more time to think about real issues in the country rather than concentrating on celebrity gossips. This will save invaluable manpower of the country.

Projecting her as a national role model for empowered women, Minister Mr. Bipul Tibrewal who has brought the latest property division bill in parliament has demanded that she has shown how an empowered woman can save a nation and demanded that this day is observed as National Empowered Women Day throughout the country with full respect and honor.

Mr. Tibrewal has also added that Mrs. Pushkar case proves that even if a share in husband’s ancestral property is given to the wife, Indian women will dedicate their lives for their husband rather than taking away their property. The minister has the huge ancestral property that Sunanda could have claimed if she had gone for divorce. But she has given her life to save her husband. This shows that the law of giving the husband’s property to wife in a patriarchal society like ours is highly justified.

The chairperson of Worldwide Oppressed Women (WOW) and a prominent opposition leader Mrs. Chatterjee has commented that “Sunanda’s husband is a minister himself and can never impose any kind of cruelty to her defined by Indian laws. He doesn’t need dowry and hence the Dowry Death demand is vague. He has several ways of earning money and does not need money from a woman to survive. All these laws are only for common men who always need money to survive.”

Commenting on this incident, Mr. Birup Sarkar who has been fighting against these biased laws for years has said, in any normal circumstances the man would have been dragged to jail even from his deathbed and all his relatives would have been behind the bars for abetting suicide. Some trigger-happy feminists and media would have termed this as ‘Bride Burning’ instead.  There would have been demands of new laws in the country, new candlelight marches and new FB pages demanding Justice for Pushkar. However, everyone is silent now. This is the greatest tragedy in India where the common men are always treated differently under the same law. He says since the death is within seven years of marriage it must be recorded and treated as dowry death.

As we did not understand how this suicide with no burns could have been termed as Bride Burning, we went to another rights activist who is famous for giving his weird opinion in all matters – Mr. P S Khan. He has clarified that always the filed cases under section IPC 304B (Dowry Death) data is presented as Bride-Burning in India to give it more importance. He showed the RTI he had filed with NCRB to know the Bride Burning data for last five years after he was extremely moved by media propaganda of “one bride burnt every one hour in India”. He came to know that there is NO such record maintained by NCRB in India.

This matter is now referred to the cabinet to conclude why this is not a dowry death but should be treated as an exception. Some say that this may be referred to the president as an exception. Some like Mr. Khan have opined (again a weird one) that soon India will witness another BIG rape, or calamity or foreign invasion or some carnage or some other event that can shake the entire nation to forget this case.

We are not able to form any opinion on this matter but feel that it is better for ordinary men like us to believe what we are made to believe by our leaders just to avoid another disaster. So we think it is not a dowry death but suicide of an empowered woman who has saved this nation in many ways as elaborated by our thought leaders. (Spoof) 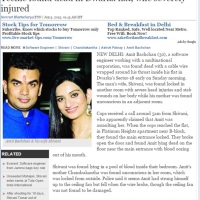