I Just Smiled at a Child and He Started Shouting ‘Papa, Papa’

It was a relaxed morning. Even on certain weekdays, I get some time to relax and go around the city to complete some unfinished tasks. It was one such day. Since I am happily single, I don’t have the daily morning rush hours to prepare any kid for his school or go shopping vegetables for my family. My mornings are normally well spent either cooking for myself or going out for movies or just going to my favourite breakfast joints for lip-smacking breakfast.

My city’s Volvo service is worth appreciation. It gives me a feeling of my private chauffeur-driven car with the comfort of Air-condition. It is usually fast and sometimes takes me to my destination without any delay. I prefer public transport over a personal vehicle as It gives me a feeling of contributing to nature and easing vehicular traffic in the city.

It was a usual relaxed morning for me, and I was happy as usual. I went to a local pathological lab to get my blood test reports and to consult the doctor there for my yearly routine health check-up done. My doctor made my day special, as she confirmed that I didn’t have anything wrong in my reports.

I was returning to my home by a Volvo and was in a light mood when a woman boarded the bus with a child in her lap. The woman was in her early thirties and the child could be around 2/3-years of age. He could speak but not very clearly. The woman was wearing Sindoor in her forehead signifying that she could be Bengali, Oriya or Assamese, married woman.

The bus was relatively empty and even though I was sitting in the rear, I was clearly visible from the front rows of the bus where the woman has boarded. So, when I saw the woman boarding the bus with a cute little child, I smiled at the child and waved to him.

As always happen in such cases, the child was elated, and I felt good too. But soon he started shouting ‘Papa, Papa’ and wanted to come to me from his mother’s lap. His mother gave me a hard look and then I could see her properly.

She was a woman in her early thirties probably from a Bengali or Oriya family. A look at her stubborn face and burning eyes told me that she might be an extremely quarrelling type woman. Even though she was wearing Sindoor on her forehead, that didn’t mean to me that she was happily married at all. There was no happiness in her face.

Whereas her child was elated the moment he saw me. His face was enlightened, he started brimming with joy and ecstasy. His mother made him sit facing in the other direction so that he couldn’t see me. But he was not the one to sit there patiently. He turned around and started jumping on his seat and wanted to come to me, sometimes saying in his broken language ‘Papa, Papa’.

As he was enjoying and smiling and jumping, I had to continue cheering him and waving at him. That little kid had made my day, but as he was also shouting ‘Papa, Papa’, his mother gave me some hard look many times. Her eyes were brimming in anger and disgust.

They boarded-off the bus after a few stops.

When I shared this incidence on social media, it created an uproar of laughter. My friends wanted to know what did I do secretly, most people who read that small update of the child calling me (an unknown person) as ‘papa’, created a huge humour on social media. Probably, I would have laughed at other men in a similar situation, too.

But when I thought about the incident and wanted to think about why he started calling me as ‘papa’ even though he didn’t know me and I could have only looked like his father, the only possibility that came to my mind was that the child was missing his father badly and he was desperately looking for his father around. I felt that he was forcefully removed from his father and is not able to see his father for a long time and desperately wanted to see him. It was as if some unseen forces have forced his father out of his life.

Having undergone such fate in my own married life, I understood the situation very well. In my life, the last time I met the child I was rearing for 2 years was a Diwali night in my wife’s parental house. Only I knew that it was the last night I would have ever met the child as after that day, I was going to send the divorce papers to my wife in her house. The information was not known to anyone else that I have prepared divorce papers to get rid of my cruel wife.

I came home around 10 pm that night and at around 12 night, I received a call from my ex-wife that the child was crying so much for me that they wanted me to come there and take the child with me. This was an unprecedented incidence as that 2-year old child used to be very happy in her mother’s house (mama-bari) with his mother, grandparents and maternal uncle. Somehow, I asked them to pacify the child as it was not possible for me to come there that night. But after I disconnected, I cried my soul out as the child realized that he would never see me again in his life. Some invisible and inexplicable way he came to know that it was the last night for him with the person he called ‘papa’.

This incidence had made me cry my heart out many times in the last ten years. Probably the child had also undergone the same. And I know if a child misses his papa who he loved the most, he would search for a father in every other man. So, when an unknown child started dancing after seeing me and started calling me papa, I knew that probably he had also undergone a similar fate.

The first sight of the woman told me that she could be a highly quarrelling type woman and a difficult one to live with. I was almost certain that she could have got separated from her husband and forcefully abducted the child who was desperately looking for his father in his life. Many children can’t take this sudden disappearance of their father from their life and judiciary in many countries actively promote and aide in this process of child abduction and torture.

This incidence didn’t bring me any comfort or happiness. Rather whenever I think of this incident now, I feel extremely sad for the child and his father, both of whom may be missing each other terribly. For grown-up men, they can get multiple avenues to express their sorrows but how can a child express how much he misses his father?

The joyful expressions on the child’s face, the way he started jumping on the seat calling ‘Papa, Papa’, the way he was laughing and his desperate attempts to come to me from his mother, showed me how much he loved his father.

The hard look of his mother, her stern face and red eyes told me how much a nuisance she could be in anyone’s life. As a mother, she surely has failed the society as her own child was jumping to come to a stranger like me. That signified that she might have traumatized her own child and her own child didn’t want to be with her. This incident told me, how much shared parenting is needed in Indian society and why the interest of these children needs to be upheld with the utmost importance and urgency without giving child custody to the mothers blindly.

Read – What is Shared Parenting and How That Can Be Achieved

No, the incidence was not funny at all, it was rather a sad incidence which I will not forget for a long time in my life. 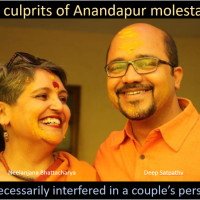