The All New Diversity Challenge For Corporate

James Damore, a techie in Google has recently created a worldwide storm by challenging Google’s (and indirectly many other companies’) diversity policy as he said such policies actually isn’t in favor of business or any individual. In his internal memo to other Google employees, Damore presented research-based reasoning why positive discrimination in favor of women in technology and leadership areas isn’t really creating equality. This is against Google’s internal diversity policy and for speaking up against his company he was subsequently fired from the company. However, if we look at his arguments and pieces of evidence we will find out that there is hardly any scope of argument there. Feminists and the so-called social justice warriors have no stand in claiming it to be otherwise.

In his memo, Damore said, according to Google, freedom from any offense is providing psychological safety to its employees, but shaming one to silence to agree to company’s biased policies is against the same principle. He said, in this ideological eco-chamber anyone opposing such policies is silenced (he was proved right later as he was fired by his management) and no corporate should do that.

Damore has correctly pointed out the feminist bias that believed all disparities were due to oppression, and to correct the same companies needed another round of oppression of the leading section of the population. In this context, he proved that 50% representation of both sexes in any field (ideal from feminist ideology) is not possible because of difference in traits in these two genders.

While stating that Google and most of the politicians and media being left biased, due to their moral values, he also discussed the right biases. He spoke about the left bias that all humans are naturally cooperative instead of being competitive (right bias). He also presented evidence of left bias in US media from The Journal of Economics, where researchers have shown the left bias of the majority of the US media with evidence.

In his memo, Damore has also explained possible reasons for tech biases. In his argument, he showed globally across culture and across history men and women have shown different behavioral traits and less representation of women in the tech industry is not socially constructed. So, even if there may be exceptions (like in India), that can’t be a ground to believe that men and women are all same.

What Do Psychologists Say?

Behavioral psychologists and many evolutionary psychologists who have done cross-cultural studies do confirm the same corroborate his claims. Feminists may claim that women can do everything a man can do and they can still present many examples of that, but various cross-cultural studies by different independent researchers have already proved Damore’s point. In developing countries like in India, women take part in technology companies more because of Indian economy and comparatively higher paid salaries there. Whereas in Sweden, Norway, Switzerland where women are more empowered and can choose from anything they want, they choose more social roles than technology-based roles. This finding confirms Damore’s claim that women are naturally not inclined to take up tech or leadership roles.

There are experiment with newborn babies to show how male and female babies behave differently from immediately after birth. Boys show more interest in things (or objects) whereas girls show more interest in human faces. Biologists explained this phenomenon as driven by testosterone level in a child. A female child with higher testosterone may, however, behave like a male child and get attracted to male toys (like cars), but that doesn’t mean that behavior of both genders is same and we need to consider that gender behavior is socially constructed and not biologically driven.

In this context, Damore has given an example of a 2010 study of Prof. Richard Lippa of California State University. In this study titled, “Gender Differences in Personality and Interests: When, Where and Why?”,  Prof Lippa has shown that gender differences in Big Five Personality Traits (Extraversion. Agreeableness, Conscientiousness, Neuroticism and Openness to Experience) [John, Naumann and Soto, 2008] is small to medium. However, in people – thing dimension the difference is very large.

It is pertinent to mention here that Feminists believe in Social Role Theory (Eagly, 1987; Eagly and Wood, 1999; Eagly, Wood, and Dickman, 2000) that says, men and women behave differently because they are assigned different roles in traditional patriarchal (inegalitarian) societies. This is where feminists and social justice warriors (SJW) want to break gender stereotypes and create politically correct diversity theories that force companies like Google to have reservation policies for women in tech and leadership roles to create a diversified workforce.

So according to Social Role Theory, the inegalitarian (patriarchal) societies should have maximum gender difference and in egalitarian societies (like Norway, Sweden, Switzerland etc.) the difference should be weak or even disappear.

However, different cross-cultural studies have found that gender differences are highest in egalitarian societies. This anomaly has explained by Costa, Terracciano, and McCrae (2001) and later by Guimond et al. (2007). Guimond’s theory used concepts from Social Comparison Theory (Festinger, 1954) and Social Identity Theory (Tajfel and Turner, 1986), showed that people in more egalitarian societies end up comparing themselves with the other gender and report larger personality differences.

From the example of Simon Baron Cohen’s Empathizing – Systematizing Theory, James Damore argued that women being naturally socializing and empathizing in nature compared to men, are not competitive enough and hence are not suitable for highly competitive tech or leadership roles.

Coupled with the above, women being high on Neuroticism, Damore argued, report more anxiety and lower stress tolerance and hence become unsuitable for competitive roles.

Damore also argued in his memo that it is this nature (Systematizing) that drives men to take up more dangerous roles in order to get higher status and income in the society.

While outlining these differences, Damore was however cautious not to make an overt generalization about the genders as he argued that a large portion of male and female traits actually overlap –

So, the fact that some women may actually do better than some / many men in some male-dominated areas, does not mean a 50/50 split in all positions will actually deliver better business results for any corporate.

While arguing that certain traits in men and women may differ, Damore also suggested non-discriminatory ways to reduce the gender gap in tech. He suggested making tech and leadership roles more cooperative and flexible in nature may lead women to excel in these areas. However, he also wanted his management to apprise of the situation that NOT all tech roles can be made cooperative and needed to be competitive so that Google remained in business. Giving example from one study by Christina Hoff Sommers, Damore said that removing competitiveness completely will actually disadvantage men and business-like is being done in the education sector in the US.

He criticized Google’s practices and showed harmful biases that included special programs for ‘diversity’ people at the expense of other candidates. This practice, in his opinion, had created more bias than equality. Worse enough was Google reconsidering everyone who didn’t agree with such policies and creating illegal discrimination against them. Damore argued that such discriminatory policies actually encouraged race and gender tension in Google (and so will be in other companies).

Damore memo clearly showed the reasons behind such left oriented biases, as he pointed out that males were more disposable and throughout history, the mankind has protected the female gender. This left bias in our majority of government and Google (and so are in other firms’) money spent on such diversity programs that shows every gender difference as oppression for females (or ‘diversity’ population). He pointed out that the majority of taxpayer and Google money is spent to ‘water only one side of the lawn’.

Damore has also given some constructive suggestions to come out of this hypocrisy of gender bias. He suggested treating people as individuals and selecting them based on their merits, rather than treating them as a ‘class’ and considering a ‘class’ or a ‘group’ (such as females) have same traits or issues and other ‘class’ (like males) have no such issues. In his multipoint suggestions to reform Google as a business, Damore suggested to De-emphasize empathy as empathy drives us to focus on anecdotes and make us emotionally attached to groups/individuals similar to us. When that happens, dangerous biases set in.

Why Damore Memo Stands Out

In his note, Damore clearly pointed out his opinion with related psychological and biological research work and wanted to start a conversation about socially acceptable diversity and equality norms. We find that his memo was not based on any emotion or politically correct statements, rather he has shown the resolve to study psychology and human behavior fairly well before criticizing Google’s (may be true for many other global corporates and nations as well) diversity policies.

From a comprehensive study of the evolution of human psychology and from research works of various neuroscientists (some of which are presented here) we find that there is no scope of debate that male and female brains and psychology would have evolved different ways. Many Evolutionary Psychologists has independently proved that it is highly unlikely that males and female would think the same way and will have similar outcome or interests. Biologists have also studied the functioning of the human brain and proved beyond reasonable doubt that male and female brains DO NOT function the same way. Whereas they argue that nurture can weaken some of these differences but that can’t make their nature to be same.

After the memo was released, it was seen that self-appointed social experts who are mostly aligned to left ideologies immediately started shaming the techie and started calling him a sexist, bigot, frustrated brat etc. completely ignoring the strong scientific evidence he presented in his memo. Nowhere in his memo, he tried to be a chauvinist and only wanted an open discussion about various Google diversity policies (and so in other companies) in the best interest of Google’s business.

On the contrary, all voices against him were all full of emotional rants based on unsupported feminists’ claim that men and women are equal and same and all differences in genders are actually ‘oppression’ of females. In none of the opposition materials, we find scientific evidence or discussion about any biological or psychological research to prove Damore wrong. In fact, all these rants against him proved him right about feminism in a stronger way. Majority of media and so-called equality warriors’ double standards is exposed by their knee-jerk reactions. 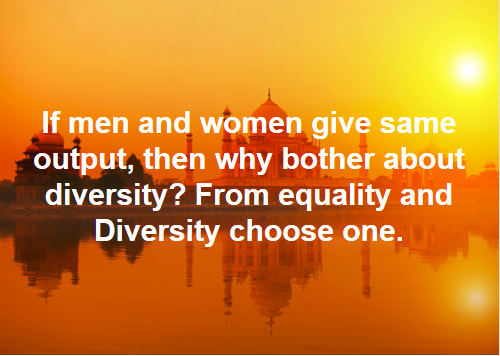 This situation also showed how fragile feminist ideological equality is. If we believe that men and women are same and they can give same results in any job, then why do we need diversity in a workplace at all? It should not matter whether the workforce is 100% males, 100% females or a balanced 50-50. Then why is diversity needed? This shows that feminists or equality warriors are clueless about their own ideology. We can only have equality or diversity, not both. It is time for all logical thinking sane persons to understand this and stand against this feminist double standard. This kind of sexist approach exists everywhere today, it is time for more people like Damore to stand up and voice their opinion without being afraid of being silenced like James Damore did. 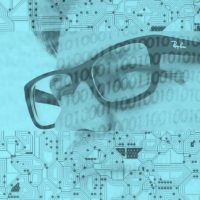