– Hi, are the calculations done?

– Yes, my guys are checking them once again

-Get the girl to check the numbers, if she says the numbers are good, I am okay to go.

It was a conversation between US astronaut John Glenn and director of Space Task Group, Al Harrison minutes before the launch of Friendship mission, a mission to make a human orbit around the earth. They were talking about calculations of astronaut’s re-entry point into earth’s gravity and precise landing point on earth.

The calculations were mind-boggling. There was an army of male engineers deployed at NASA’s Space Research Center to solve those complicated mathematical puzzles to derive complex Fibonacci numbers.

There was a woman who checked the computational accuracy of those numbers. And all including the director of the space program and the astronaut himself trusted her calculations more than that of even IBM mainframe computers.

Hidden Figures is a story written by Margot Lee Shetterly based on what the movie makers demand to be true but we don’t guarantee such truth, about three African-American female mathematicians at NASA and directed by Theodore Melfi.

This film on NASA’s mission shows the equality movement for ‘colored’ people in early ‘60s Americas and the racism that they had to overcome. But while showing the fight for equality and the initial struggle of feminists there the movie also exposes feminists a big way.

Movie’s main female characters – display the natural human traits that gained respect and empathy of billions. Their struggle was valued and created trend-setting changes to the world because they were still humans and took care of their responsibilities.

Today’s feminists, however, have gone overboard with their demands (I call these “shemands”) that create hatred against males and society to a great extent. The movie clearly shows how feminism and equality movement shaped in those days and why that was a necessity. But with unprecedented success feminists have become ever jealous and narrow-minded and became female chauvinists.

Today feminism has become a symbol of nude protests, showing bodily curves, male hatred, drunken irresponsible behavior, self-centered narrow-minded attitude. Those confident yet polite gestures had become rude and violent outbursts. The movie Hidden Figures bares it all for feminists. That is why today’s feminists need to watch this and know what feminism truly was.

The film shows the struggle that one goes through while accomplishing something for the first time. The legitimate demands get widespread support and acceptability in due course and one does not need to be vulgar. Often we do not recognize the value of these accomplishments if we inherit those by birth. That is when our demands start hurting humanity. That is what happened to feminism today. Hidden Figures a movie that upholds feminism also exposes them. 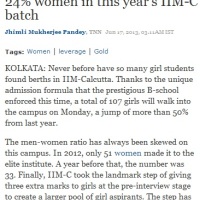