One Call To This Number Can Change Your Life Completely

Partha (36) [name changed] was contemplating committing suicide when he found out that the person who he loved more than his own life, his little kid was not his biological child. He was completely shattered when he came to know that his wife who otherwise seemed to be a normal housewife was indulged in prostitution and gave birth to the child outside the matrimonial bond.

Chandra (35) [named changed] was raped in his childhood by one of his female relatives and didn’t know what was to be done. He was again cheated in his adulthood when his wife filed false criminal cases against him to extort money.

A woman lawyer [name withdrawn] from Kolkata, WB was happily married until her only brother Dr. Subhodeep was forced to commit suicide by administering upon himself a lethal injection. Her parents were also threatened with false cases and the elderly couple was completely devastated after the suicide of their son. There were chances of her father died of heart attack due to the shock.

Partha today no longer thinks of committing suicide, he is a happily single man. Chandra is known as a warrior. Even though Subhodeep’s sister remembers him at times in isolation but she had made her parents come out of the shock of her brother’s death. The family is more determined to fight back and live well now.

There is a national helpline to help such people in distress. Men and women who are suffering badly in legal matters or who are feeling like committing suicide. What is amazing is this helpline for men is not run by any government agencies or aided by the Indian government in any manner. 80+ volunteers of Save Indian Family run this helpline for no monetary benefits to themselves and for purely social work purpose.

A sneak peek into the volunteer profiles tell us that these volunteers’ are engaged in different professions but their passion is social work and helping people in distress. And this helpline popularly known as SIF-One is dedicated to Indian men and their family members.

Recently, India’s only national hotline for men had crossed 800+ days of its existence and a press release of Save Indian Family otherwise known as SIF shows that calls come from all parts of India – 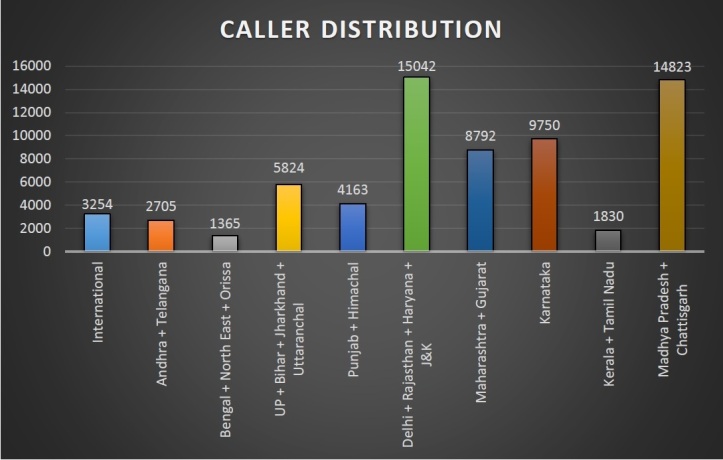 SIF-One data shows that while Delhi and Rajasthan received maximum calls in these 800 days, MP and Chhattisgarh were a close second. It is interesting to note that while Bengal and Orissa get a maximum number of dowry cases every year calls received by SIF-One from these two states are at rock bottom.

Best awareness about this SIF-One helpline is seen from Karnataka where activists seemed to have created huge awareness about men’s helpline. It is seen that when Karnataka had only 3025 cases under dowry in 2014 and is much below in terms of a number of cases filed in a year, the helpline had received 9750 number of calls from Karnataka. Karnataka is closely followed by Punjab and Himachal Pradesh where a total of 2006 cases were filed in 2014 but the SIF-One volunteers had received 4163 calls from those states.

Ritwik B Kumar who manages India’s only national helpline for men says, “The awareness of a state can’t be concluded like this. If there are TV debates that shows our helpline number our call volume increases.” He also explained that internet penetration and use may be another reason for low call volume in different states. He said – “we don’t have any awareness campaign for Indians living abroad but SIF-One still received about 5% calls from global Indians.”

Ritwik also explained that most of the volunteers for SIF-One are working full time in corporate houses with high responsibilities. This leads to dropped calls and missed calls many times as unlike all women helplines this is not a call center where the call receivers are paid for their work.

The SIF press release says that the SIF-One helpline receives calls from male victims of rape, sexual violence, domestic violence and male victims of other forms of abuse in the hands of women. It is interesting to note that 54% calls received by this helpline are from unique callers. That means every day about 45 new callers call up this men’s helpline.

Also once a call is received the SIF volunteer gives his personal number for further assistance and work on a mentor-mentee relationship and keeps the overall call numbers lower.

This helpline while giving guidance in legal and psychological matters to men, do not recommend lawyers or legal professionals. This hotline does not promote any lawyer or law firms.

Surely SIF-One volunteers are doing an amazing work in giving support to men and their families at a time when in India men do not have any laws to safeguard their life and no welfare program is run for such male victims. The psychological help provided by SIF-One volunteers also help to prevent the suicide of male victims as was seen in 2014. The suicide of married Indian males has come down to 59000 from 64000 in 2013. However, it will be a matter of observation if the suicide numbers continue to decrease when 2015 NCRB data is released.

It is amazing to note that even though this helpline is managed by full-time corporate professionals who are not paid for this social work and continue to do the work out of passion. Unlike the women’s helpline that works for money and where the employees are not even paid properly for their work in-spite of the fact that more than 90 thousand crores are allocated for women empowerment in our budget. This shows that women empowerment and various schemes towards the same are only shammed to swindle taxpayers’ money.