So yet again the UN has shown its utter irresponsibility by commenting on the documentary made by a filmmaker who had violated several rules of a sovereign state, cheated many people and made a fake and scripted video to shame a nation.

UN Secretary-General had maintained the tradition of poking his nose in India’s internal issues when he asked Indian govt. to ensure women’s safety after Dec 2012 Delhi rape. That time too it seemed the UN had no meaningful work than helping in exaggerating India’s internal issues. This time Mr Ban-Ki moon’s spokesperson was very quick to comment that Delhi rape convict’s remarks ‘unspeakable’, stressing the need for men to get involved in halting violence against women.

It has been long since the UN has taken this agenda of including men in ensuring women’s safety. There were many surveys done by UN organizations to understand Indian masculinity and domestic violence scenario. This comment of UN general secretary also comes from there.

What is shocking in this comment is a person of his stature has taken a rapist’s comment as the comment of Indian men as if Indian men do not care for their women. All this happened after a nation-wide unprecedented show of public wrath following the Nirbhaya incident. This only makes one wonder that either UN is partially blind or it has some ulterior motive to shame India and Hindus. Otherwise which sensible person of the stature of UN General Secretary makes a generalized comment like this?

This confirmed that the UN just wanted to make an irresponsible comment on a matter internal to India to create more disturbances in the country. I used to think that the UN being the organization to ensure global bonding works for harmony and global peace. However, this comment badly exposes the hidden agenda of the UN and other western nations.

If UN was really bothered about the plight of Indian women they would have spoken about false rape cases first because 75% of rape cases that are found false actually harm more women as their male family member(s) lose everything on false complaints. He would have commented on more women being arrested on false dowry complaints than commenting on an illegal video made with criminal intentions.

This report about the criminal nature of the film and suspicious behaviour of filmmaker Leslee Udwin tells us only one thing. She is a terrorist in the disguise of a filmmaker, a terrorist who wanted to create disturbance in India in the name of her ‘Freedom of Speech’.  I have no problem a foreigner like her expressing her ‘Freedom of Speech’ in her own country, but when she does that in an alien land that only confirms her intentions of creating a disturbance in that country (click the image for the news)– 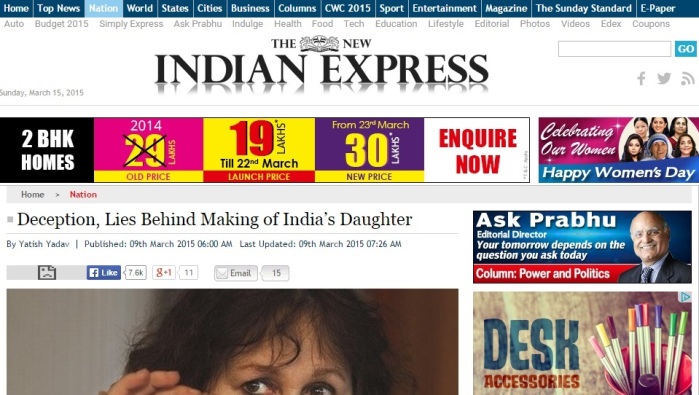 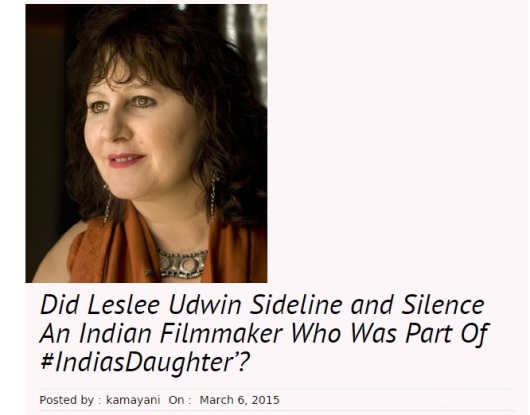 When the above information of her criminal attitude comes to our notice we understand how irresponsible UN comment was. What is the guarantee that s filmmaker who had duped everyone to make a film, did not write a special script for Mukesh to shame India? This becomes evident when we note what Nirbhaya’s male friend Arvind Pandey said –

“The documentary is unbalanced as the victim’s viewpoint is missing. The facts are hidden and the content is fake. Only Jyoti and I know what happened on that night and the documentary is far from truth,”

Backing his claim, Pandey said he had never heard the name of tutor Satendra, who features in the documentary. “Moreover, how does he know which movie I wanted to watch on that night,” asks Pandey.

So we understand the Leslee in order to shame India has resorted to bringing fake people as Jyoti’s tutor and claimed weird fancied things to justify HER own viewpoints. So it is clear that whatever was shown on the film was her own viewpoint and anyone blaming Indian culture for that because those words came out from the mouth of an Indian criminal can only be termed as anti-Indian. The UN General Secretary is no exception to that.

But the movie and the attitude of global bodies like the UN have proved very detrimental for India as a nation. Indians who are very emotional in nature and very protective towards their women joined hands in lynching two rape accused, one in Dimapur, Nagaland and the other in Agra, UP. In both the cases, there was a mere allegation and the allegations were not proved. The Dimapur lynching was utterly shocking because the girl who filed the complaint was having an affair with the man and she filed a rape case when the affair had gone sour. She had also accepted on record that she had taken money from him but still she had filed a rape case. These kinds of incidents will not only make love life miserable for all couples (because no one knows when the woman files a rape case on her own lover) but this will leave men utterly afraid of an affair with any girl. As a result, both men and women will suffer from loneliness and crime rate and addiction to drugs will increase.

The men who were a part of the lynching mob could also be lynched tomorrow on the pretext of some rape and there will be no one to save them. The same men and women who joined them today to punish a criminal will join hands tomorrow to lynch him.

But the Dimapur incident was not confined only to the lynching of one man. It extended beyond that when it came to light that two NSCN-IM terrorists have fled the jail during the time of public outrage.

Today, because of some emotional Indian fools who got deeply moved by a criminally minded film and some irresponsible comment by a global leader two terrorists have fled the jails. They will now kill more people at ease. Some people in the mob that lynched the alleged rapist may also be harmed by the terrorists. They will have no one but themselves to blame.

In India, even terrorists are not lynched. The woman who got a life sentence after killing Rajiv Gandhi got assistance from another woman Sonia Gandhi to get parole but an alleged rapist whose crime was not proved and the crime that he did was to love a girl, was lynched and given mob (in)justice. The outrage that was carefully created by the criminal filmmakers like Leslee Udwin based on an extremely dreadful and shameful incident took the life of an innocent lover. Even if there was rape in Nagaland, that was not so grievous as the Dec 2012 incident. Going by this standard any married man or any man who ever had sex with any woman can be termed as a rapist. Same way, there could have been many more rapists hidden in the lynching mob. It is only a matter of time that these emotional fools are also treated the same way that they have shown in Nagaland.