Rohtak Sisters – They Are Not Bravehearts But Criminals

In India, women have an easy way to fame. That is assaulting men in public places and getting instant fame and in most cases getting additional money and compensation from the government. It does not matter whether the case has any merit, the only requirement in all such cases is the woman needs to beat the man mercilessly, abuse him and before doing all these she needs to ask one of her friends to shoot the incident of male assault.

Then thanks to social media the video will go viral and then instant fame with all different media promoting the girl’s story and making her a hero (oh I am just trying to be neutral here) and terming the man/men as instant criminals. Today this business has the instant return of a few lakh rupees for the girl. The man in question may lose everything but that does not matter to the society.

All media is ready to pick stories of such oppression and they are ready to create stories around how the women were teased, molested or sexually harassed and how public was silent in the whole matter and they watched the women being harassed as we have seen in the case of recent Rohtak bus incident (from Zee News)-

Be it teasing a girl in a big mall in Kolkata, be it the famous street brawl in Meerut, be it the harassment of morning walker in Bangalore or be it the latest incident of two girls mercilessly beating up men in a bus in Rohtak, Haryana all such perpetrators of violence are sought to instant fame and stardom by media and by news hungry, hypocrite society. None of them bother to understand what happened in the situation and all are busy making prejudices about the boys being guilty and the girl (s) being innocent or telling the truth.

However, our belief about such degrading standard of women’s moral values gets stronger when we come to know the real story behind the incident that had happened in Rohtak (click the image for the news)– 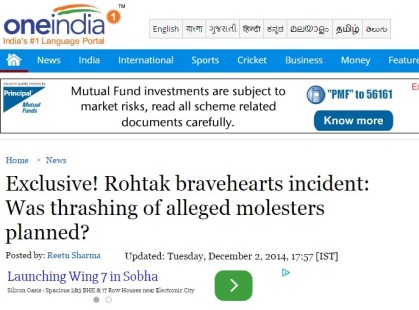 In fact, when we know the real story and come to know that the two young girls actually made an old lady vacate a seat for them. I fail to understand what level of cruel world we are living in where two young girls forcefully make one old lady vacate her seat and then they are termed as Bravehearts? It is shame for entire Indian media that has failed to report the incident in a proper manner and bring out both sides of the story.

It clearly shows that it does not matter whether there is any truth or half-truth in what the girl is saying, it is shame that our society is always ready to punish the boys the most merciless way. Governments are busy in awarding the girls’ instant compensation in the name of bravery award. The so-called Bravehearts and Indian media were completely exposed when another video of these two women criminals came out (from CNN IBN).

In this case, too the girls were found fighting with two men in a park and the other men around did not say anything or tried to protect the girls. The shameless media did not see that the girls are habitual offenders but reported that the Bravehearts are acing eve-teasing almost on daily basis.

After this video came out and media continued to report the girls as Bravehearts, it shows how low the standard of our journalism has become. Media clearly failed to see them as habitual offenders who need immediate jail term and stern punishment. Along with these girls Indian media and the officials in Haryana Govt. who had decided to reward the girls on Republic Day also need to be punished. They are directly patronizing violence and trying to justify the crime.

Jasleen Kaur was first exposed on The Male Factor-

Jasleen Kaur was not harassed – she is telling lies

It is common sense that people around the girls would have protested if the girls were really the victims. The only reason no one protested was that the girls were, in fact, the offenders. The people around didn’t want to get involved in the controversy by saving the boys. Everyone just tried to avoid incrimination by media. The public inaction in both the cases confirms that the girls are habitual offenders and they need immediate and strong punishment for what they have done. Else this would be an everyday affair by criminals and the governments will keep on rewarding such criminals.

Here’s is what the eyewitnesses are saying. My journalist friend Deepika Narayan Bhardwaj went to the village to shoot it. Indian media clearly failed to bring out this side of the story –

To end, if Indian legal system fails to take suo-moto action against the girls and send them for rigorous punishment and if Indian Army does not take the falsely accused guys back that will show that our legal system has completely broken down and we are living in a state of anarchy.

In a recent investigation published by LiveIndia Tv on 28 Dec 2014, it was found that the girls’ family is under heavy debt and they are habitual offenders of others. They have debts to the tune of 60 lakhs from people from different villages. National Commission for Women (NCW) has given such girls bravery certificate. As a civil court, how can they issue any certificate to anyone? Is it not a miscarriage of justice and promoting criminals? Shouldn’t the NCW be banned and its officials be arrested for this step?

[We had the video here but the video account is deleted. This is how the crime committed in the name of women empowerment is suppressed]

Take this quick survey and let us know what you think –

Now note a few facts about this news reporting –

1. This news is covered only in a less known newspaper The Tribune and hence mostly hidden from public eyes
2. The headline is mentioned as ‘Sonepat sisters’ and not as ‘Rohtak Sister’ hence making it difficult for anyone to track back the news at a later point in time
3. Defense counsel will always say something to defend their counsel and will try to find flaws but the news is presented here too softly
This is the reason we never remember crimes committed by women. Also in-spite of committing a serious crime they are still not in jail.
***