Will You Marry A Rape Victim? 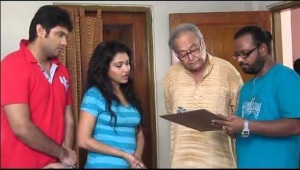 Srote is a young happy girl of a middle-class Bengali family. Her boy-friend Swapno is the son of their family friend. Both Srote and Swapno love each other for quite some time. They were in the same college and after passing out they got jobs too but in different cities.

Swapno got a job in Kolkata whereas Srote in Hyderabad.  As Srote was about to live in Hyderabad both the families decided to go to Digha – a nearby tourist destination.  That three days trip made the lovebirds even closer together. Their parents too felt the need of bonding them together.

Before leaving for Hyderabad, Srote visited Swapno on the previous day. As they were departing and going away from each other for some time they became very emotional. Swapno could not ignore the attraction of Srote and they made love for more than one hour in Swapno’s room.

As Srote left for Hyderabad both the families decided to set the marriage date. The date was finalized soon and all were happy. Especially Swapno’s grandma was very happy. She loved Srote as her granddaughter and was excited to see her as their Naatbau (Grand-DIL).

Srote joined a company in Hyderabad where she met Raghav Lahiri. As both were Bengalis they became friends very fast. One day Raghav took her to a night club and after a few pegs offered her to share a room in a five start hotel. Srote was shocked, she immediately refused and left the place, but Raghav had other plans.

He became vindictive and one day bribes the driver of Srote’s office cab for a detour. He took the cab to the intended destination where Raghav forced himself on her.

Media was fast to pick up the story. Both the families rushed to Hyderabad and took her back to Kolkata after the initial police investigation was over. Srote was mentally devasted. She could not believe any man and even started refusing her heartthrob Swapno.  All men became her instant enemies.

Seeing Srote devasted and needing assistance her parents decided to pre-pone the marriage. So they have taken the proposal to Swapno’s parents. His father was ready in no time but wanted to take the opinion of Swapno’s mother and Grandmother too, because both of them were very close to Swapno. While the grandmother had summarily agreed his mother has rejected Srote as DIL now. She says all relatives know what happened to Srote and she being their bahu will invite criticism from many. She has asked Swapno to choose between her and Srote, both of whom he loved so much that he couldn’t think of a life without either of them.

Now Swapno was in a dilemma. He didn’t know what to do. He cried, cried …and cried. Srote’s parents were devastated by this news. No amount of pestering would work with his mother. Swapno broke down. He started smoking to alleviate the pain.

But the mother could not be stubborn for long. She loved her son more than herself. So she came to him and promised that she herself would bring Srote with full respect to their house. She will talk to Srote as she had recovered by then but she wanted one condition to be fulfilled by her. She told the same to Swapno.

Srote was alone in her room when Swapno went to their home. Swapno was happy that at least his mother had agreed to accept Srote as her DIL. He told Srote that his mother wanted Srote as her Daughter-in-law but there is a condition. Srote will have to leave the job.

Srote knew it was a proposal not to leave one job but it was a proposal to leave her career. She was a good student all through her life. How could she leave her job and career at all? She had a lot of dreams that she wanted to fulfill. But she loved Swapno too. She didn’t want to let him go.

She asked him about his conditions.

Swapno was shocked. He didn’t have any other conditions but Srote wouldn’t believe. She refused his offer instantly, after all, no relation can be based on some conditions. She told boldly that she rejects the marriage offer by him. She would rather love him from a distant rather than marry him and compromise all the time in her married life.

Swapno cried, he pleaded her to come back to him as he really needed him but she wouldn’t listen. She has decided to move on.

Every Rape changes a lot in many lives. It is not only a heinous crime but it leaves a permanent mark on the victim’s mind, body, soul, and life. It changes many lives surrounding the victim too. Thus it is very important that we stop misuse of rape laws. There are many consensual sex cases termed as rape, many live-in relations are termed as rape and there are many women who file rape cases just to take revenge, earn money or marry the man of their choice. Thus in India, 75% of rape cases end in acquittal.

Don’t take any false rape case lightly. These false cases clog the judiciary and justice to genuine victims is delayed and many times denied. Most of these cases are settled for money.

Please don’t tolerate such business with rape cases. Demand punishment for all such fake rape victims. They don’t undergo the pain and trauma that the original rape victims undergo. They are the real criminals of the society. There are many women who file multiple rape cases just as a business. Demand their strict punishment so that rape does not become trivialized. Let the genuine victims get justice, let the justice be fast and let the false accusers be exposed and punished. One rape may change many lives, including yours.