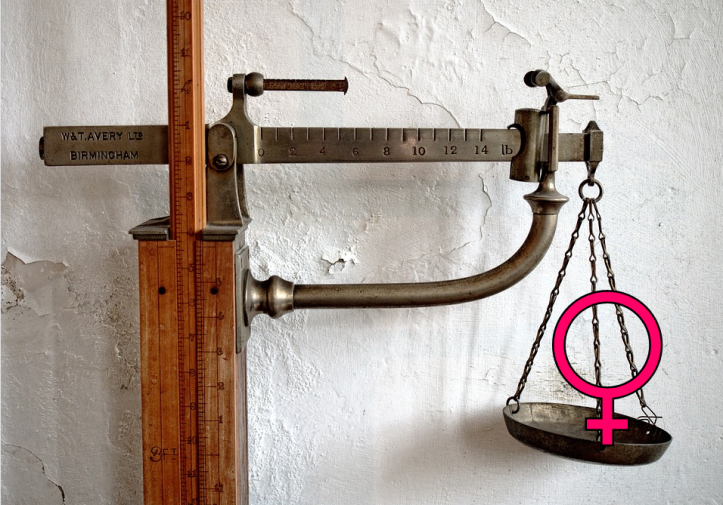 It can give you jitters, it can make your scared, it can frighten you to the core but still, you can’t avoid the circumstances or ignore the developments. India has for the first time in the history of any nation is going to introduce a gender biased court. A court which is civil in nature and will have powers to issue summons and also arrest warrants.

So now no one can ignore summon sent by the national commission for women (NCW) and necessary amendments to NCW act is being made for that.

This may be unbelievable for any peace-loving citizen that a commission which is dedicated to cause of a particular gender, a commission which works only for that gender and creates a provision for one gender even by depriving the other gender simply based on gender is being given the power to act like a court and punish people. No wonder a commission championing the cause of the one gender will continue to do the same and deprive men of justice. Because the chairperson of the commission is supposed to be committed to the cause of women and so are the members so a man can NEVER expect any justice from such a court.

Now all those women who think of this step as the revolutionary need to know the true face of NCW. In one case in 2012 one mother-in-law contacted NCW to save her from the atrocities of her Daughter-in-law (DIL) the reply of WB NCW was this – 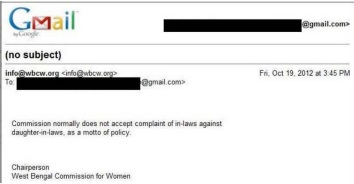 NCW clearly denied helping the elderly woman. In another case when some elderly women went Bangalore office of commission the chairperson simply refused to meet them. So if as a woman you are glad that NCW is being converted as a court wait for the day when you are sent to jail for them or turned away by a court that is supposed to champion your own cause. As a man who might have championed women’s causes lifelong, you need to understand that simply based on your gender you will be discriminated by this newly formed court.

The news also says that rules will be formed so that the members are not from a political party meaning now only feminists will rule the commission and interpret the laws in their way. It does not matter which political party the accused belongs to the cases will be decided based on one’s gender. Since the commission primarily exists to champion the causes of women, any woman filing a complaint there will be given relief. Since the nature of the court is civil most of the time the relief will be in the form of money. So now extortion of money from men will be easy for women.

Addition of NCW as a new layer in our civil justice system will only increase misery for men. This court will first ensure that the man pays money on the mere complaint in every case and then the man will have to run to other higher courts for relief. As we know in India the justice is already screwed up this additional court where the members champion the causes of one gender will make sure that the man and his family (if anything left) pays the heavy extortion money to the new champions of women’s causes.

With this debate, you know what these feminists are really up for and how an extortion racket is being built slowly in India. This also clarifies that when everyone is interested to talk only about crime against women there is no one who really talks and thinks about legal extortion of men, because if it is done then the money flowing from men to these groups and institutions will end.

This kind of outrageous provision as it straightway violates our constitution that talks about equality in terms of gender. Even though article 15(3) talks about govt. being able to form rules in favour of women but if we look at the reason 15(3) was created in the first place was to remove discrimination against women in terms of access to public resources. It is because when this article was framed then women had a restriction to access different public places like bathing ghats, temples etc. However, it is not the case for our legal system. No court in India bars a woman from filing a complaint. Hence today when the commission itself needs to be abolished it is given the power of a civil court biased towards a gender. Nothing can be more outrageous than this.

India is already reeling under the huge issue of misuse of gender-centric laws where justice to men is denied. Today women can ruin anybody’s life by filing false cases and still claim victimhood and easy money. 75% rape cases, 80% dowry death complaints and 85% dowry harassment complaints are found out to be false but with addition of one institution set up primarily for championing the causes of women as a court (which needs to be unbiased in the first place), the injustice meted out to Indian men will only increase. This will lead to a serious increase in crime rate and suicide among men and by this proposition Indian govt. is ready to drive more men to suicide. If we don’t protest this right now in all possible forums and stop this initiative, we will only force our future generation of boys to commit suicide.

If you don’t protest today, don’t expect justice for your men and your sons tomorrow. Don’t be surprised if they commit suicide or commit a crime to come out of this trauma tomorrow.

are responsible for your future

2. Why we need gender-neutral laws

3. India no place for peace-loving men