In their continuous effort to tell lies and divert public opinion for fake causes, the Powerof49 campaigners are out with yet another lying campaign on the literacy of Indian women. This article on Jaagore website refers to a UN article that gives women literacy figures from 2001. Probably the Jaagore campaigners forgot that we are living in 2014 and there are many such studies done by many more feminist groups, researchers, and different UN groups. So if this UN page was a recent study as claimed by the Jaagore website, then it would have referred to some of the recent findings by either UNDP, UN Women’s Organization or even from some of the studies done by the Indian researchers.

However, this article fails to bring in these conclusions through any research or quote any research findings to support these findings. Hence these are only some utopian theory by the Powerof49 campaigners.

Now let’s see what some of the researchers have found out about the reason behind poor literacy among women in different developing and other poor countries.

Professor Linda Scott, of Said Business School, University of Oxford has shown in her research work published on 28th January 2010 that the tendency of post-pubescent girls missing school as high as five days each month in these poor countries. These are the countries where there are no adequate numbers of schools, and girls need to walk long distances to go to school. In her research, she has shown that this trend is prominent wherein schools there is poor or no privacy, not adequate and separate toilets or washing facility or poor management of girls’ menstruation and hygiene.

In her study on menstruation for Indian women and lack of informal education system, Aruna Wilson has shown that this is still a taboo subject in India and Indian girls’ still have to follow archaic unhygienic methods for sanity. This is another reason why these girls’ fall sick in those days due to poor management of hygiene. This poor hygiene management is another reason why India experience greater gynaecological morbidity (Garg, Sharma and Sahay 2001).

Even though Aruna Wilson’s paper doesn’t specifically address the poor literacy issue among women it does support the observations made by Prof. Linda Scott for developing countries. A major reason for women dropping out of schools is poor sanitation, a poor washing facility for the girls in schools and expensive sanitary pads (the market controlled by the multination brands, make these products extremely costly for poor Indian families to afford a hygienic way of life.

This is the very reason why UNICEF has taken up a WASH program in schools of developing countries to improve girls’ education in 2012. This program also included India as a country.

If we look at the facts and figures presented in this study, shows how poorly Indian rural areas figure in terms of selling these products. This report clearly states that (refer to page 18 of the report, second para – “Evidence shows that limitations are placed on girls’ mobility during their menses, which in turn limits their school attendance”.

The problem with India is the rural India that is still in poverty can’t afford the expensive sanitary solutions and different UN programs of providing cheaper varieties of such products are also not adequate.

Now in another Jaagore campaign on Women’s Health and Sanitation issues, they claimed that one out of every four-girls drops out of their schools due to menstruation and hygiene-related issues. So we know how the Jaagore and PowerOf49 campaigners have created their own story for poor literacy among women.

Now let’s look at the latest statistics available for education in India.

This link from UNESCO gives a clear picture of literacy in India.

A 2013 study on ‘Education for All’ (EFA) by UNESCO we find startling facts about education in India (you can download the complete database from – http://www.unesco.org/new/en/education/themes/leading-the-international-agenda/efareport/statistics/ from the link ‘Statistical Tables’)

The concerns that Jaagore campaigners have highlighted in their article are completely false. The following tables taken from a recent UNESCO report clearly depicts the same –

Please note the increased GPI in 2011 and more enrolment of girls for pre-primary education.

Please note, a lesser number of boys intake in 2011 compared to the year 1999 and a substantial increase in GPI (F/M). This shows that currently, the main issue is the girls are sent to school while the boys are kept out of the school. Which is very alarming but the Jaagore team is only trying to aggravate the situation for boys.

Please find that in 2011 GPI for India is 1. In terms of Net Enrolment Ratio, GPI remains the same and we also observe a good increase in enrolments in girls in 2011 compared to the year 1999.

In terms of Out-Of-School children, the gender gap is narrowed down in 2011 –

Interesting but sad point to note from above two tables is the percentage increase in enrolments for boys is much less compared to that of girls. However, the Jaagore campaigners are spreading lies that Indian parents still don’t send their daughters to school.

We find that there are some drop-outs in upper secondary level for both boys and girls. There may be many reasons for this. It may be the capability of students to cope with increased stress, course curriculum or may be a purely economic reason as most of the families in India still live in poverty. For girls the issue of menstruation discussed earlier is another additional reason and hence we find more drop out of girls at the upper secondary level. But these statistics definitely refute any theory given in the Jaagore article.

In fact, if we look at the absolute number of Out-of-school adolescents in India we will find there is a narrow gap between girls and boys in that perspective. 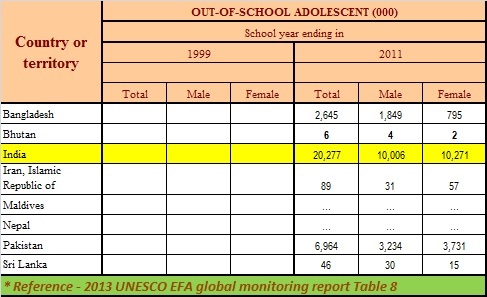 In any country, widespread education till the secondary level is of paramount importance to ensure fast-paced growth. It is also important to ensure that education is spread far and wide and reach the poorest of the poor in an effective manner without creating any gender bias. There is no denying the fact health and sanitation is an important issue for women especially when it comes to menstrual health and maintenance of dignity. For that matter building, separate and hygienic toilets with water facilities may be justified as we don’t want our daughters to miss education for menstrual-related issues. But as a nation, we also need to understand that poverty is a major issue in this country and hence buying expensive and hygienic-sanitary pads or tampons is still a luxury for many. This is an unfortunate reason why girls from many other poor countries suffer as well. However, the effort by Jaagore campaigners to brush aside the real issue and showing some fictitious issues as the reason behind poor illiteracy among women is really shameful. Also as the latest UNESCO statistics show women are not far behind in terms of education and catching up at a faster pace than men. In this scenario, a demand by Jaagore and PowerOf49 campaigners for more facilities for women in education will only deny education for boys who are still legally responsible to earn and maintain their families.

It is unfortunate that a most respected brand like Tata is funding the movement of lies in Jaagore and PowerOf49. It is also unfortunate that while Jaagore campaigners are continuously trying to create huge gender imbalance in the country by showing some false reasons it is only our future generation, especially the boys are becoming in danger. This shows that there is an urgent need for establishing 1. National and State commissions for men and boys, 2. Establishing of Men’s Ministry and 3. Separation of Child Development Ministry from the Women and Child Development Ministry so that all children development is taken care of irrespective of their gender.

There is also a need for corporate houses like Tata Group to observe restraint in getting involved or funding any movement that creates gender hatred in the country. The stakeholders of the group need to unanimously demand the group’s separation from the movement as this shows poorly on Tata’s brand values, corporate ethics and definitely a stigma for the whole group.

Under these circumstances, if any political party pays heed to any of the false demands of the Jaagore, PowerOf49 campaigners that will be disastrous for India in the near future and the political party adopting the agenda will be solely responsible for creating such gender hatred.

1. International Women’s Day exposure – Truth behind The Power of 49 campaign

2. International Women’s Day 2014: What Power of 49 campaigners will not tell you