Blogging To WIN: The Win ’14 Conference By Blogadda

I felt very lucky to be invited by Blogadda to attend India’s first ever national bloggers meet and award ceremony. Even though it was in Mumbai and I had to bear the travel cost on my own and only registration cost of Rs. 1000 was waived I found that as an opportunity for me to be there, network with other bloggers and learn a LOT of things about blogging.

So I decided to travel there by bus. Unfortunately for me while traveling to Mumbai my bus met with an accident with a Karnataka politician’s car and that car was completely damaged. Even though it was the car driver’s fault as he rammed into our bus from behind and there was no casualty, there was a huge problem with the car owner and it seemed that incidence would turn into a state vs state (Karnataka vs. Maharastra) debate. The politician was from Karnataka and most of the people in the bus from Maharastra. I was amazed to find how an accident can turn into a much larger state issue in minutes. Finally, the matter was settled in local PS but in that process, I have lost two valuable hours that I could better use for networking in the conference.

But as always happens in all Indian events, the Blogadda event too didn’t start in time and by the time I arrived at the venue, got freshened up and went to the venue the program has just started.

Immediately after we reached the venue we were given a kit by the organizers. The kit contained a very well designed neck-liner bearing the name of the participant with WIN ’14 logo on one side and the details of the sessions on the other. There were some gift vouchers and a beautiful Blogadda badge. Both the badge and neck-liner is worth preserving as beautiful mementos of the event for future.

The first session was on Storytelling Vs Blogging where Anil P and Kavi Arasu set the tune of the conference right.

Anil P described storytelling through photography and showed how different aspects of photography can add personality to a storytelling technique. It was an amazing starter for the photobloggers. It was definitely a great value-add for a starter like me who wants to explore different genres of blogging.

Kavi Arasu – another seasoned blogger narrated his journey through a mind-blowing storytelling technique that has won everyone’s heart. The main takeaways from his session were –

In short, Kavi Arasu was simply the best in his storytelling technique.

After a short tea break, a session on The Influence of Blogging started with Lakshmipathy Bhat, Anaggh Desai, and Manu Prasad.

This session was mainly to elaborate on individual’s branding through blogging. Speakers mentioned that modern human beings say a lot of things differently but a blogger/writer need to understand the advantages and challenges of their medium well before they get into writing.

Some of the challenges of blogging that were discussed-

He mentioned that bloggers need to have a passion for blogging and authority on the subject and also mentioned 5 ‘P’s to measure the effectiveness of a blog – Purpose, Platform, Plan, Produce, Promote and Pitch.

In the same session on the influence of blogging Anaggh Desai discussed the social way of blogging. He mentioned that a blogger may think – “Blog is a social way / My way or highway” but ultimately people will read only what they want to read. The blogs that have no feed for a long time eventually dies. He mentioned.

This was another awesome session that gave much-needed insight into blogging. It created a purpose for new bloggers like me and the takeaways from this session will definitely motivate new bloggers to come up big way in blogging.

This was the last session before lunch and some of the winners were announced after this session. Lunch break gave us much-needed opportunity to meet and discuss with other bloggers the main reason why I traveled to Mumbai from Bangalore.

The first session post-lunch was on blogging to publishing attended by Kiran Manrai and Ravi Subramanian.

The outcome of this session was also awesome. Bloggers present there got the much-needed insight into publishing. The main takeaways from this session were –

The next session on Travel, Life, and Music was attended by Ekalavya Bhattacharya, Karl Gomes, and Vasundhara Das. I had high hopes for this session as I write about travel and life a lot. However, this session turned out to be an advertisement of MTV Roadies program and was a big turn off for many.

Next was an impromptu session from Shekhar Kapoor who just mesmerized the audience with his golden words. He spoke about mainstream Indian media, media biases and changing the face of media. Since I am associated with some human rights groups in India and we closely monitor media and media reports, I found that session most useful and an eye opener for everyone. Read this article of mine to know more about this session. 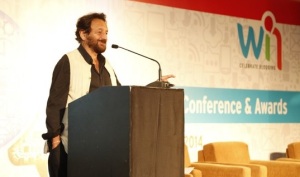 After the session by Shekhar Kapoor, we had some seasoned bloggers telling us their success stories. Bloggers Anuradha Goyal, Amit Agarwal, and Arjun Ravi took us through their stories that kept all of us engaged and added more reasons to continue blogging.

Amit told us how bloggers could help the society in times of natural disasters like tsunami, Uttarakhand disaster etc. He also spoke about how he makes money through his tech blogging (we came to know there is at least one blogger who earns enough only by blogging J).

Anuradha spoke about her journey from 2005 a journey that improved her travel and book review blogs and also her personal traits like observation power.

Arjun Ravi spoke about his music journalism and blog.

After this, there was a stand-up comedy act that was a pathetic show. Well, I can’t be any modest than that. The comedian needs to know simply by sexualizing anything and everything can’t give him success even though sex sells everywhere.

After the boring comedy act, the award winners were given prizes by the blogging luminaries present on the occasion and in the end, we had two sessions. The first one was on Video Blogging and the second one was on Food Blogging. Each blogger had to choose one among the two and I have chosen the video blogging session by Jay HindTV.

This session started again on a wrong note. Organizers introduced the speaker asking the audience – “Do you know how to make your video viral on the net?” Obviously, none of us knew the answer he was expecting, so he answered – “Cats, Dogs and Boobs”….well no one present in the audience was thrilled by this, rather it was a very bad introduction to a topic. Not sure why some people want to sexualize everything unnecessarily.

However, the person from the JaiHind TV managed it well. He spoke a lot about new technologies, the evolution of internet media and video blogging. Even though his content was little lengthier and the presentation format and font colors were painful to our eyes, he could hold our attention and convey the importance of video blogging to us. He too gave an insight into proper statistics how popular media channels fool us with TRP numbers and create opinions in their favor and take us away from the truth.

I could not attend this session until the end as I had to catch my flight back to Bangalore. Overall I felt that in-spite of some glitches the conference was a great success. It was even worth traveling to Mumbai to attend the same.

For a similar event next time, I would like to see the following included in such an event –